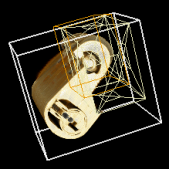 Research IT’s vDAL (Visualization and Data Analysis Laboratory), isn’t only a place for exploring different realities with your research with VR, but a way to test out graphically intensive research.

Mario Sandoval Olivé, a PhD student in the School of Computer Science is building a new multimodal interaction mapping framework for 3D object manipulation within the virtual reality (VR) realm.

They used the dual NVIDIA 1080 Ti graphics cards in the vDAL’s workstation to test their framework, which offers multiple actions for controlling 3D datasets on desktop Virtual Environments allowing operators to perform multiple activities at once.

For example, in the images above, the user can simultaneously move the voxels of the 3D object and select a brick of the dataset explored and move it as well to rotate the user camera to see the better angle for exploration.

If you would like to use the vDAL’s workstation for graphically intensive computing, to try our VR facilities, or have a general vDAL enquiry, contact Research IT or Joshua Woodcock.